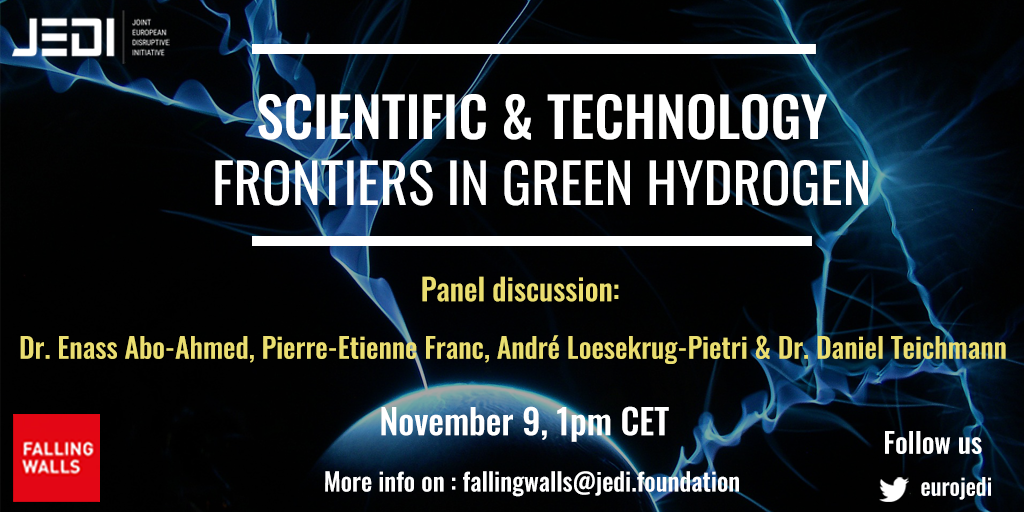 One of the next GrandChallenge launched by the Joint European Disruptive Initiative, the European Darpa, will cover several fields of Green Hydrogen, hydrogen produced without carbon emission.

Join the discussion with great experts in this field to discover which scientific and technological frontiers we need to overcome for Hydrogen to become a major element of our path to carbon neutrality!

About JEDI – The goal of the Joint European Disruptive Initiative is to bring Europe and democracies in a leadership position in breakthrough technologies. It is launching Technology Challenges to push the frontiers of innovation, invent the next big thing, and provide our societies with a decisive competitive advantage, to ensure economic prosperity, strategic autonomy, and democratic resilience.

This is a digital event. When the event is taking place, you get access via a link on this site. Add the event to your schedule and receive a reminder.

Dr Enass Abo-Hamed is CEO and Co-Founder of H2GO Power, a company that develops safe and low-cost hydrogen storage technologies.

Dr Abo-Hamed completed her PhD at the University of Cambridge where she was elected also as the university energy champion and was awarded a 2017 Royal Academy of Engineering Enterprise Fellowship to help develop H2GO Power. She won multiple awards in recognition of her work building H2GO Power: one in 100 top influential women in Engineering in the UK and Europe by the Financial Times and inclusive boards in 2019, MIT Tech Review Visionary of the year, the Peres Heritage Initiative, The European House Ambrosetti innovator of the year among others. Enass also advocates for better inclusion of science in politics and engineering promotion to addressing climate change and is an ambassador for the This is Engineering campaign. @enassAbu

Pierre-Etienne Franc, graduate from HEC Paris, joined the Air Liquide Group in 1995 as strategic analyst for the Group general management.

He then held several positions in large Projects Business Development, Operations General Management, Strategy and Diversification activities. Since 2010 he has been supervising the portfolio of advanced businesses and technologies initiatives of the Group, in the fields of energy and environment, space,aeronautics, cryogenics, gathering 20 companies.

Since June 2017, he is Vice President, Air Liquide, Hydrogen Energy World Business Line, in charge of developing the full potential of H2 activities for the Group worldwide and supervises Air Liquide Venture Capital arm (ALIAD), which he created in 2012.

He is the current Hydrogen Council Secretary.

After working for BMW Group, McKinsey and Leoni, he founded Hydrogenious LOHC Technologies in 2013 as majority shareholder.

He is today the CEO of a team of ~100 employees and believes in the critical role of hydrogen for our future energy system and is committed to contribute to its continued success.

André Loesekrug-Pietri, held leadership positions in private equity, government, industry and as an entrepreneur. Starting as assistant to the CEO of Aerospatiale-Airbus, he then spent 15 years in private equity and venture capital. In 2017, he became Special Advisor to the French Minister of Defence, responsible in particular for technology and innovation. He is the Director of the Joint European Disruptive Initiative (JEDI), the European Darpa. Graduate from HEC and from Harvard Kennedy School, he attended Sup-Aero aerospace engineering school. Nominated Young Global Leader by the World Economic Forum, he is a private pilot and Colonel with the French Air Force People’s Reserve @andrepietri and @eurojedi