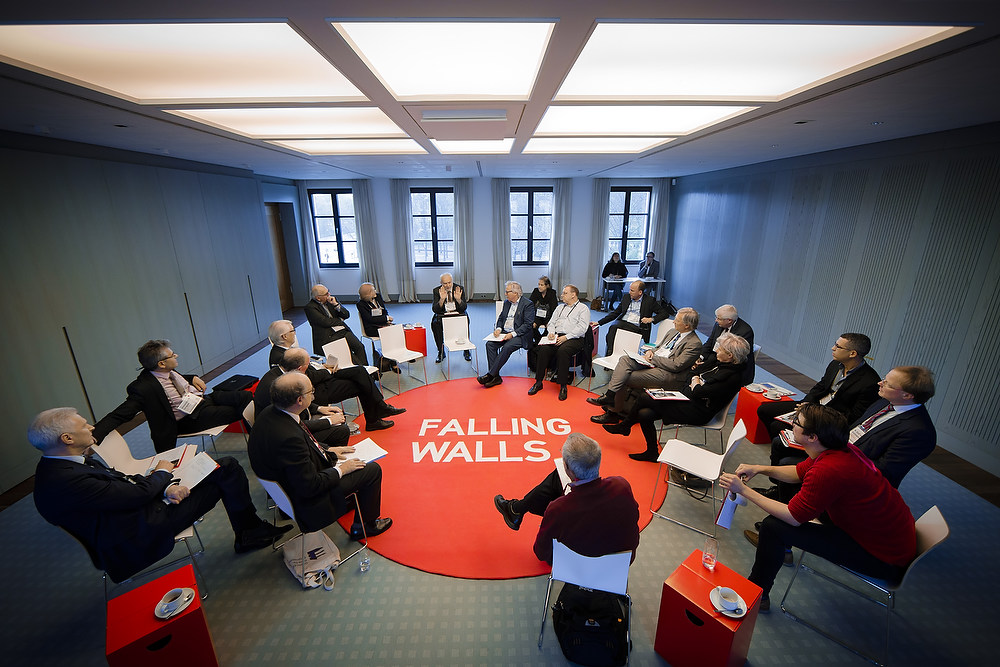 Falling Walls Circle – Round Table: The Future of Quantum Computing

The “Future of Quantum Computing” Round Table examines our current crossroads moment in the development of quantum computers. After 25 dynamic years of fundamental theoretical and experimental research, the top leaders in the field worldwide, and in Germany, have committed themselves to the development of quantum computers as a real technology, solving real computational problems. The panelists of this Round Table, leaders in this field for many years, are in a unique position to give their expert understanding of the critical issues – largely technical, but also financial and political – that will be key to the success of this enterprise.

Christine Silberhorn is a German physicist specialising in quantum photonics, she is currently Chair for Integrated Quantum Optics at Paderborn University. Silberhorn is best known for her role in leading research projects which develop tailored quantum devices and systems for use in quantum computing and quantum communication. In 2017, her team was awarded the largest European Research Council grant for her research. In 2005, Silberhorn was a Max Planck Research Group Leader in Erlangen, heading the Junior Research Group Integrated Quantum Optics until 2008 until 2010, completing her habilitation in 2008. Her research work has been awarded by several prizes; most prominently she received the Gottfried Wilhelm Leibniz-prize in 2011. She is elected member of the Leopoldina, of the North Rhine-Westphalian Academy of Sciences, Humanities and the Arts and Fellow of the Optical Society of America. In 2019 she became a fellow of the Max Planck School of Photonics.

Rainer Blatt studied physics and received his PhD at the University of Mainz. As postdoctoral fellow, he worked on laser cooling of atomic beams with John L. Hall (Nobelpreis 2005) in Boulder (USA) and as a research assistant at the University of Hamburg with P. Toschek he worked with single trapped ions. In 1994, he became professor of physics at the University of Göttingen and in 1995, he accepted a chair position at the Institut f. Experimentalphysik of the University of Innsbruck, where he works with trapped ions in Paul-traps for quantum computers, quantum simulations and quantum metrology. Since 2003 he is research director at the Institute for Quantum Optics and Quantum Information (IQOQI) of the Austrian Academy of Sciences (ÖAW) in Innsbruck. R. Blatt is co-founder of Alpine Quantum Technologies GmbH (AQT) in Innsbruck, a company developing commercial quantum computers. For his quantum information research, he received the Schrödinger-Prize of the ÖAW in 2006, the Stern-Gerlach medal of the German Physical Society (DPG) in 2012, the John-Stewart-Bell prize of CQIQC (Toronto) in 2015 and the Micius Quantum Prize 2018. R. Blatt is a member of the Austrian Academy of Sciences, the Spanish Royal Academy of Sciences and the National Academy of Sciences of the USA.

Oliver Ambacher obtained his PhD in physics at the Technical University in Munich in 1993. Between 1990 and 2000, he was a researcher for gallium nitride (GaN) at TU Munich as well as at Cornell University (USA) at Walter Schottky Institute. Following his habilitation in experimental physics in 2000 and his promotion to senior assistant in 2001, he was appointed professor for nanotechnology at the Technical University of Ilmenau a year later. In 2002 he was elected director of the Institute for Solid State Electronics and two years later he was appointed director of the Center for Micro and Nanotechnologies. Since October 2007, Oliver Ambacher has been a professor at the Albert Ludwig University in Freiburg and head of the Fraunhofer Institute for Applied Solid State Physics, where he is currently involved in the development of quantum sensors and electronic components for quantum computers.

Frank Wilhelm-Mauch grew up in Baden-Württemberg (Germany). He studied physics at the University of Karlsruhe, now KIT, getting his degree in 1996 and his PhD in 1999 with a topic in theoretical solid-state physics. He began to research on quantum computers in 1999 as a postdoctoral researcher at Delft University of Technology in the Netherlands. He completed his habilitation at Ludwig-Maximilians-Universität in Munich in 2004. He was an associate professor at the University of Waterloo, Canada, from 2006. In 2011, he returned to Germany to a professorship in theoretical physics at Saarland University, and in 2020 he became the Founding Director of the Institute for Quantum Computational Analytics at the Research Institute Jülich. His field of work is the theory and modeling of quantum computers with superconducting circuits at different levels between devices and applications. He coordinates the project “An Open Superconducting Quantum Computer” in the European flagship program Quantum Technology.

Piet Schmidt studied physics at University of Konstanz & Portland State University; 2003: PhD in physics from University of Stuttgart with T. Pfau; 2003-2005: PostDoc with D. Wineland and J. Bergquist at NIST (Boulder); 2005-2008: junior research group leader at the University of Innsbruck with a START award from the Austrian government in the group of R. Blatt; since 2009: full professor at Leibniz University Hannover and Physikalisch-Technische Bundesanstalt in Braunschweig; since 2016: speaker of the CRC1227 DQ-mat; since 2019: co-speaker of the Cluster of Excellence QuantumFrontiers.

You need to be logged in to use this feature. If you just logged in and still see this window, please refresh this page.